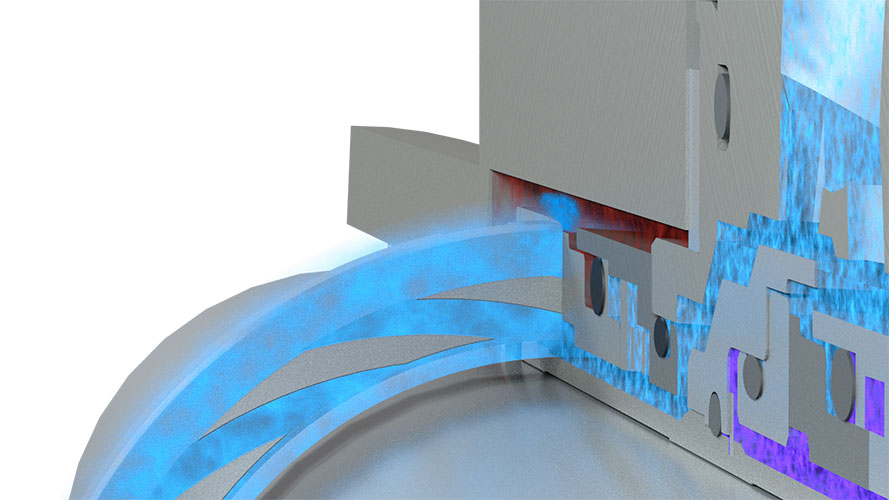 Upstream Pumping (USP) is a seal face technology unique to John Crane, which adds the spiral grooves, commonly seen in non-contacting gas seals, to the inboard seal of a dual mechanical seal running on a liquid barrier fluid. The grooves draw in the barrier fluid and pressurize it as it reaches the tips of the grooves. This pressurization has the combined effect of causing the seal faces to ‘lift off’ each other, running with zero contact, and it can cause a low-pressure barrier fluid to leak backward by being pushed into a high-pressure process stream.

More information on this novel technology, including a video showing the operation of the spiral grooves, can be found here.

The non-contacting seal face and unique pumping technology create several benefits for the operator of these seals, including a significantly increased mean time between repair (MTBR) and an ability to survive many service conditions which could cause severe damage to traditional mechanical seals. This blog will explore the sources of damage that are overcome by the unique operation of USP seals.

Traditional seals operate best in a steady-state environment, and sudden changes in operating conditions tend to result in a much shorter seal life. This is due to the extra contact and wear between the seal faces as they undergo minute distortions during changes in condition. In addition, a seal running at a new set of conditions may need to ‘bed in’ again over the next 50 to 100 hours, over which period wear will be higher.

In a USP seal, the inboard faces have lifted off and have a thick, robust fluid film. This film acts as a cushion between the faces, preventing contact during operating condition changes.

In pressure changes, the faces may be pushed closed together. This simply causes the groove efficiency to improve, generating more lifting force, and bringing about a new equilibrium at the new conditions. This response has been found to be near-instantaneous.

The thick and stable fluid film at the inboard seal has been found to be very resilient to transient conditions, including sudden changes, without incurring contact, including:

Mechanical seals are designed to run with higher pressure on one side of the seal faces. If the direction of the pressure changes, and they are required to operate in reverse pressure, this can cause high wear or catastrophic damage to a mechanical seal.

Pressure increases in the seal chamber can come from

In addition, dual-pressurized seals normally have a face-to-face or back-to-back configuration, with the higher-pressure barrier fluid on the outside diameter (OD), which means that the seal faces are under a compressive load. In reverse pressure, the higher pressure is on the inside diameter, putting the seal under a tensile load. As many seal faces are made of brittle materials such as silicon carbide, they are weak in tension, and a significant reverse pressure event may cause the seal faces to fracture with catastrophic results.

In addition to being resilient to poor lubricating processes, USP seals are also arranged in a face-to-back configuration, allowing a design where the most sensitive parts of the seal can be positioned away from the process fluid. USP seals share much of their design features with traditional slurry seals.

This means that the seal is very robust against abrasives in the process stream, and delicate components such as springs cannot become clogged by slurries or other suspended solids. As the seal is lubricated by the clean barrier fluid, there is also no abrasive damage to the running surfaces of the seal faces.

As traditional seal faces have abrasive friction between the seal faces, this causes them to typically be the hottest part of the inside of the pump. This means that it is the location most likely to see the build-up of scale.

In a single seal or dual unpressurized seal, this scale will start to form on the seal faces themselves. This disrupts the precision flatness of the mechanical seal and causes significant leakage, resulting in the need to refurbish the seal.

Even on a dual pressurized seal, where the faces are lubricated by a clean barrier fluid, if scaling starts to form around a mechanical seal, it is only a matter of time before the scale works its way around the primary seal gap. This scale will start to spread and force its way into the primary seal, pushing the faces open.

A USP seal has zero contact at the seal faces, and therefore the faces run at a temperature barely above the bulk fluid temperature in the pump. This means that it is much safer to operate a USP seal in a fluid close to the scaling point without the risk of scaling damage to the seal.

The most used barrier fluid for a USP seal is water. This is because low-pressure water is usually readily available at the pump location, and many services which are ideal for Upstream pumping technology are also compatible with a small amount of water being injected into the process stream. Therefore, USP support systems are normally designed to be connected directly to the site water supply. This means that they will automatically replenish barrier water as it is consumed, and there is no need for regular top-up activities from site maintenance personnel. The operation is, therefore, much simpler than most common types of dual-seal support system.

The GS USP is John Crane’s globally standardized USP support system. It is designed to fit directly into the site water supply, has a small footprint, and is easy to install and operate.

As there are so many conditions that would normally cause severe damage to a traditional mechanical seal, which a USP seal is extremely robust against or even completely immune to, it means that they have been successfully deployed as ‘problem solver’ seals on bad actor pumps with very short seal life.

For a pump where the seals are being damaged after only months or weeks of running due to one or more of these forms of damage, switching to a USP seal could completely change the story and eliminate their reliability issue, leading to increase uptime and a predictable process stream.

Are you ready to learn more about the benefits of using Upstream Pumping seal face technology? At John Crane, we have over 100 years of experience, so contact one of our experts today.