Originally published in the May 2012 issue of Pumps & Systems.

After 8 years of problem-free operation, a bearing failure forced an outage at a nuclear power plant. When two more bearing failures followed in the next three months, the plant launched an analysis.

The plant assembled a failure analysis team that included plant engineers, turbomachinery consultants, repair shops and bearing manufacturers. Following a thorough investigation that included computational modeling and rotor dynamics analysis, the team found that temperature fluctuations created clearance issues in the bearings, causing them to fail. In response, the team designed a new profiled bearing that was more tolerant of temperature-related clearance changes and provided excellent support to the system.

The plant’s generation station had eight vertical pumps that circulated condenser water. A 28-pole, 2,500-horsepower synchronous motor above each pump operated at 271 rpm. Each generating unit included four pumps. The units could run at full capacity with three pumps, but capacity dropped by 10 percent when two pumps were out of service.

In each failure scenario, a lower motor guide journal bearing, located opposite the thrust end, failed after a sudden drop in the ambient temperature. This bearing was 16 inches in diameter and 3.4 inches long. Each bearing had a circular bore divided by six axial slots connecting two circumferential grooves at each end. The bearing was designed to run with tight clearances to minimize vibration. The lower bearing journal was umbrella-shaped and attached to the motor’s shaft, with the lower half submerged in an oil bath sump. Two diametrical opposite holes at the bearing journal’s lower half were aligned with the bearing’s bottom circumferential groove as pumping tubes for oil supply.

Using computational fluid dynamics (CFD) software, the analysis team developed numerical models of the passages in the oil sump and bearing liner. The analysis examined several conditions that could prohibit proper oil delivery, including the pumping hole’s alignment with the distribution groove (the bottom circumferential groove), the sump’s oil level and the oil viscosity and temperature.

One computational model—a free-surface model of the sump, rotating umbrella assembly and inlet to the pumping tubes—helped shed light on the issue. The team developed the model to determine the quality of the oil inlet conditions at the pumping tubes and to evaluate how the sump’s oil height and sump oil temperatures affected oil flow.

The free-surface model showed that the pumping tubes had to be aligned with the lower circumferential bearing groove to make the pump’s action efficient. Misalignment could reduce the volume of oil flowing through the tubes by 10 to 15 percent, which could starve the bearing’s upper half of oil, particularly if the viscosity was high. The team also found that variations in the oil sump level had not caused the failures. However, the model showed that the effects of temperature on the oil’s viscosity could affect the system. While the sump temperature never dropped below 50 F while in operation, if an equipment operator started the motor after it sat idle in below-freezing temperatures, it would not have adequate lubrication.

The team then made a three-dimensional flow model of the sump to examine its flow velocities and look for areas that had entrained air or were oil-starved. The model included the pumping tubes, bearing area and drain tubes, but excluded the sump’s free-surface model to make the numerical solution practical. The model showed that entrained air made up less than 3 percent of the sump’s volume, that the bearing journal’s rotation caused the oil velocities in the grooves and that the sump had good flow through the axial grooves and out the drains.

When the team performed its rotordynamics analysis, the bearing failures’ cause was still unclear. It appeared that the upper half of each bearing, situated above the sump level, was rubbing, which is why the team had closely scrutinized the lubrication method. The bearing’s clearance was about half a mil per inch shaft, a tight clearance used only in a vertical orientation. In this orientation, the bearing must produce enough support for the rotor to withstand imbalance forces and transient loads.

When creating a new bearing design, the team’s goal was to increase the bearing’s clearance and provide good lateral rotor support. The team considered an offset taper pad arrangement, which provides a high level of support. These motors must transition from minus 250 rpm to plus 275 rpm at every start, though, so they needed a symmetric bearing profile design.

The team proposed a new profiled bearing design with preloaded pads. Profiled bearings have pads with a radius of curvature that is not concentric with the rotor journal’s geometric center. The design creates preload from a converging and diverging oil film on the bearing’s surface to provide positive, hydrodynamic loading. As oil is forced into the converging section, it creates a pressure buildup that provides the necessary stiffness and damping. When the film diverges toward the trailing edge, the reduction in pressure draws out the hot oil so that fresh cool oil can enter and reduce the bearing temperature. The proposed bearing’s diametrical center-of-pad clearance ranges from 10 to 16 mils, while the diametrical edge-of-pad clearance is 3 to 4 mils greater than that.

Compared to the old design, the new bearing has 158 times more direct stiffness and produces more direct damping at speeds above 138 rpm, helping it control rotor motion more effectively. The plain bearing’s damping was greater at low speeds, which was a concern, since the motor rose from minus 250 rpm to plus 257 rpm at each start. To address the issue, the team recorded the pump starting and used a special, high-speed sampling routine to track the shaft’s centerline position during the transition. The data showed that the new bearing could control the transition adequately.

The team also conducted an unbalance response analysis and found no resonances, regardless of the bearing’s design. The analysis showed that the new design reduced the rotor’s amplitude by 24 percent at operating speed.

Even though the bearing design eliminated the plant’s failure problems, the team’s lubrication analysis had not explained the failure’s root cause fully. Why the bearings had only failed in the top half was still a mystery.

Many team members suspected that a drop in ambient temperature had caused the motor frame to contract and squeeze the bearing.

While the thermal analysis was complex, the team generally found that as the ambient temperature decreased, the bearing needed a higher heat flux, causing the bearing’s temperature to rise.

After the team concluded its analysis, the plant replaced its plain bearings with the new profiled bearings in all eight pumps. Despite many plant exposures to low ambient temperatures, all the pumps continue to operate smoothly. 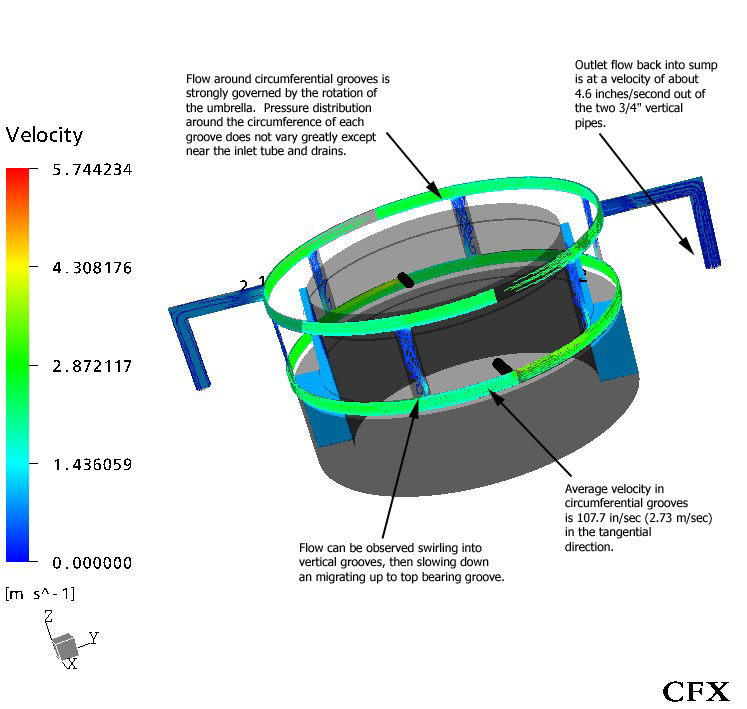